🏆 Champion of the Month: Rowen Kimpton 🏆

Our July champion of the month is a fabulous one for you all! Our champion is Rowen Kimpton from Grounded Circus, a Bristol based circus collective providing cabaret acts and walkabout performers to festivals and corporate events around the UK!  Grounded Circus was founded by Rowen Kimpton and Trystan Chambers in 2018 when they were in their first year of circomedia at university, training as high-skilled circus performers to theatres, events and festivals.

An opportunity on the rise

We asked Rowen what influenced him to start training in circomedia and he tells us “It has been an interest for many years. 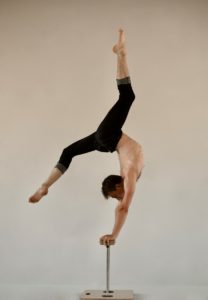 While still in school in 2016 I worked with an incredible company, No Fit State, spending two weeks as a dazzled teen while world class circus artists swung above my head and stood on their hands around me. After that project I didn’t want to go back to real life. So I didn’t, I found local classes, a wonderful university in Bristol, and now five years later I’m travelling all over doing what I love!”.

Discussing what influenced him & Trystan to start Grounded Circus Rowen told us “We were both surrounded with so many self-employed artists that weren’t getting work. We wanted to get ahead of the game and have something waiting for us when we graduated, so we started the company to provide work for our friends and ourselves”.

Since starting the company, they have produced around 20 Grounded Circus shows and booked many of their self-employed workers onto a range of gigs where they can perform and showcase their talents, with Rowen himself having done at least 60 performances himself.

Whilst Rowen stated he was so ‘infinitely proud’ of the shows Grounded Circus has produced over the years, the achievement he is most proud of is the livestreams Grounded Circus were able to provide over lockdown. 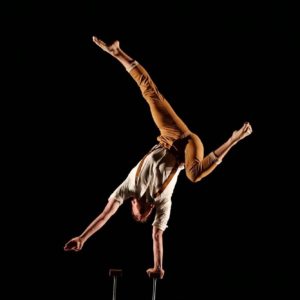 They performed two online circus shows in 2020 and 2021 that gave artists all over the UK and internationally the opportunity to showcase themselves. “We brought smiles and entertainment in a difficult time and gave performers a much-needed creative project. The shows were viewed by thousands of people globally and raised over £3000 to split between the performers”.

It was a brilliant initiative that Grounded Circus brought to their followers, allowing people to take some time out of reality and enjoy a variety of performers doing what they love.

On the subject of trickier times, aside from muddy festivals and slippery stages Rowen said he found it challenging to balance work whilst also finishing his degree, “Most of the preparations for a busy summer season happen in the height of the academic year, so I’d be writing essays one second then gathering a cast of circus performers the next! The joys of working with a business partner meant we could pick up the slack for each other as and when we needed to!”.

Hard work and commitment pays off

One of the things Rowen enjoys most about what he does is meeting people, “I have met so many lifelong friends while in dressing rooms of performances. I’m surrounded by incredible people who are talented and creative, people that inspire me to become better and keep doing work that fills my heart.” Grounded Circus has allowed Rowen and Trystan to go all over the UK performing and meeting other self-employed artists with their brilliance and creativity.

Some of Rowen’s favourite performances to carry out is queer gigs, “I have a burlesque handstand act that I am lucky enough to perform in amazing queer venues and spaces. The feeling of radical self-love I get when I perform these gigs is absolutely unparalleled. The electric feeling coming from the audience fuels me for weeks after”. Grounded Circus is all inclusive and showcased a range of Drag performers on their livestreams. 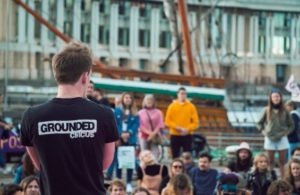 Finally, when asked if he has any advice for others that are self-employed Rowen said “Structure. Give yourself aims, deadlines and all that fun stuff. It’s so easy to give yourself a day off and fall behind, you’ll get out of your business as much as you put into it, no matter what field you’re in”.

We loved learning about Rowen’s journey and the beginning of Grounded Circus, check out their website here

Thank you to Rowen! If you are interested in being featured as our August champion of the month head over to our Instagram or Facebook and tag yourself in our next post to be considered and you might also bag yourself a £20 Etsy gift card!