Gig economy workers are more likely than the general workforce to be happy with the flexibility, control, training, and earnings their work gives them, according to a report just published by the Social Market Foundation.

The project was sponsored by Deliveroo, which signed a legal contract with the SMF ensuring the think-tank’s complete independence over its work and report.  The SMF is a charity overseen by a board of independent trustees, and their report key findings were:

2.  Riders choose Deliveroo in preference to other work. The majority came from employment, with only one in five unemployed, on furlough or looking for work before starting on the platform. Most believe they could have found other forms of work if they wanted. Only 12% did not think they could have found work without Deliveroo. 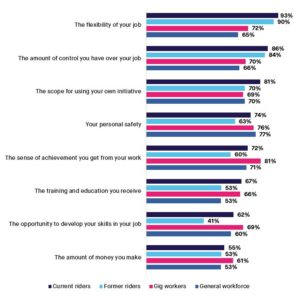 5.  Riders favour their current legal status, recognising the trade-offs it entails. Most riders would be unwilling to sacrifice flexibility or earnings for more generous benefits. The vast majority (91%) do not want to become employees, though most would like to combine self-employment status with more benefits. 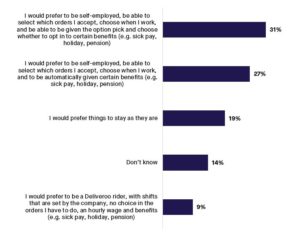 6.  Riders can see Deliveroo as a primary source of income. While 60% of riders have other forms of work, nearly a quarter say over 70% of their income comes from riding with Deliveroo.

7.  Riders see Deliveroo work as a long-term option. One in three current riders say they intend to still be riding with Deliveroo in five years’ time; one in five say they expect to be doing so in ten years.

James Kirkup, the Director of the SMF, said: “Some political narratives about the gig economy suggest that the people who work in it are unhappy and exploited and have no choice about how they earn a living, but this report shows that those narratives are at odds with the facts.

This report shows that Deliveroo riders, and gig workers in general, are as happy in their work as other workers. More important, they are aware of the trade-offs and consequences that flow from working in the gig economy – and they choose to do that work on the basis of that knowledge. They are not victims. They are economic actors making informed choices about how and where to use their time.”