🏆 Champion of the Month: Hollie Williams 🌟🌟

Here at IWORK we’re celebrating independent workers and the drive they have showed to become successful in what they do, and we’re delighted to announce our April ‘Champion of the Month’ is 🌟 Hollie Williams 🌟, also known as ‘The Weave Queen‘ by many. 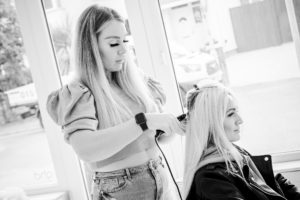 Hollie completed hairdressing college in 2012 and has since built up a successful business over the last 9 years and now owns a salon where she specialises in weaves and keratin bonds.  Hollie said she believes she was ‘put on this earth to make hair long and long only’.

When asked what influenced Hollie to begin her journey to success she said ‘Hair extensions always had my heart as I had so heavily relied on them when I was growing up. I had a pretty traumatic experience when I was younger experimenting with bleach before I was taught professionally how to use it in college. I cried to my mum saying I needed hair extensions to get me through the un-intentional mullet I had created through snapping and bleach damage. My passion really came from knowing I could do a brilliant job in making my customers feel better about their hair related insecurities. Nothing makes me happier than making my customers feel the best version of themselves’.

People have travelled from all over to achieve their hair goals at Hollie’s salon, one of Hollie’s greatest achievements as she tells us ‘the distance ladies have travelled to be in my seat! I have had customers fly from Norway, Belgium, Mallorca, Jersey, Ireland and the Isle of Man. 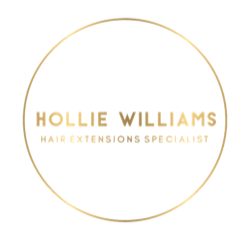 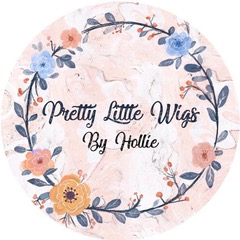 The Wirral really has become the weave hub of England with customers travelling from all parts to see me! To think people are so committed to coming to see me taking flights or spending hours in a car or a on a train is just amazing and makes me so proud’.

Hollie has worked alongside many big names in the hairdressing industry including the Kardashians own hairdresser Jen Atkins, and has also provided weaves to TV personalities and influencers such as Chloe Khan and Imogen Townley.  But it took a lot of hard work and determination to build herself up to this.

Success is Much More Than Hair!

When we asked Hollie about her biggest challenges she said: 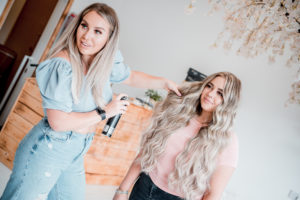 ‘When I did my hair extensions course it taught you a very small part of the job – simply how to apply them. It didn’t really prepare me for the big wide world and I have learnt the hard way for many years to get to where I am.  Working alone meant I had no one to ask for help or advice but I think it only made me stronger in the end.  There is a lot of pressure in this day and age as you can’t just be a good hair extensions technician and rely on that.

You have to also be incredible at taking pictures, have a strong social media presence, be good at keeping up with the messages and enquiries, on top of hair orders, maintain beautiful insta-worthy salon and most importantly make your customers happy. It can seem a lot to juggle but it really is the key to success.’

Hollie has trained many hairdressers and hosts regular masterclasses where other salon owners can learn from her and perfect their weave game. 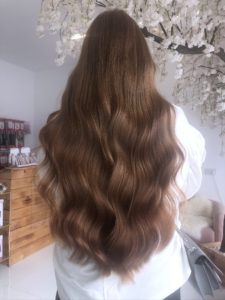 During the coronavirus pandemic Hollie adapted to the challenges she faced and launched ‘Prozone’ teaching hairdressers online how to perfect weaves and bonds with video tutorials and guides.

Also, many of her own clients needed their weaves re fitted and bonds removed so Hollie offered free video tutorials on how to safely remove these at home, and Hollie was on hand for any of her clients that had problems with removals.  She also offered a service in which clients could send their weaves to her and she was would sew in clip ins as a temporary solution for clients to wear their weaves until salons opened again and they were able to have them properly refitted.

During the first lockdown in 2020, Hollie launched Pretty Little Wigs by Hollie, handmade wigs and toppers made from real human hair, the perfect alternative to weave and bonds for clients with hair loss.  Hollie told us ‘When the pandemic hit and I was faced with the reality of no face to face services I had to think fast on what I could offer. I had always toyed with the idea of making wigs but never felt I had the time. When reality set in we were going to be closed for quite some time I studied hard training with many leading industry professionals, and I created “Pretty Little Wigs by Hollie” in lockdown one. 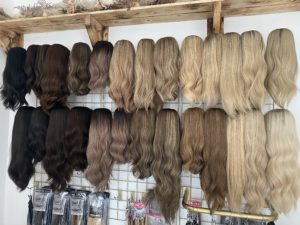 I knew I had transferable skills – sewing in weaves has its similarities to sewing wigs! I also really liked the thought of being able to help people who need alternative hair… not just additional hair. For clients with thinning hair on the tops of their head or hair loss problems, a range of wigs can be made to order, or custom made through a consultation with Hollie to see what she thinks would be the best option depending on the client’s needs’.

With one wig taking between 5 to 15 hours to complete a lot of love and hard work goes into them as Hollie needs to factor in colouring the wigs to match client’s preferences and tailoring the length.

Hollie feels one of her greatest achievements in terms of the Pretty Little Wigs ‘is knowing that I have made ladies having medical treatment or suffering from hair loss that little bit more comfortable being able to wear their beautiful alternative hair. When I see them being worn with a big smile it makes me so proud and makes all the hard work worth it’. 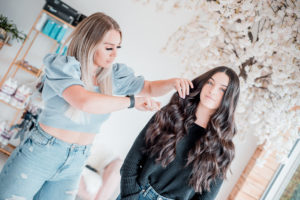 We asked The Weave Queen what she would say to others starting out as self-employed, and she told us ‘If you dedicate yourself to it through the good the bad you will come out stronger on the other side. I see each set back as a learning curve. If uncomfortable situations arise, I often step back and think, “ok… how do I learn from this to avoid it happening again in the future?” You have to be resilient, you have to expect ups and downs but most importantly you have to keep going. Do something every single day to benefit your future self even if it’s just an Instagram post of work you have done. Lots of little actions add up to big ones!’

🏆 Champion of the Month 🏆

Huge congratulations to Hollie for being this month’s champion we have thoroughly enjoyed getting more insight into what she does and why she does it, we hope this story is inspiring to independent workers everywhere!

If you are interested in nominating yourself or someone else you know to be the June ‘Champion of the month’ then follow our social media profiles and look out for next post!