In a surprising move, Matthew Taylor, Interim Director of Labour Market Enforcement at BEIS has not had his contract renewed despite there being no successor in place when his term ended on 31 January 2021.  This is very concerning given that so many people are being exploited right now in the labour market, either by unscrupulous employers reducing the rights of their staff, or forcing them into self-employment with zero rights, or by scammers stealing job applicants’ identity, or money, in relation to fake job opportunities.  We have reported on these issues (here and here) affecting vulnerable workers and jobseekers, so to us at IWORK it makes no sense to have no Director of Labour Market Enforcement right now.  Julia Kermode, our founder, tweeted: 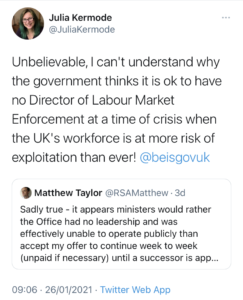 Recruitment of a permanent Director of Labour Market Enforcement

Matthew Taylor was only ever an Interim Director of Labour Market, appointed to fill the gap following the end of Sir David Metcalf’s tenure whilst a permanent replacement was sought.  The recruitment process was underway, however it has stalled which resulted in Matthew offering to stay on a week by week basis until a successor is appointed.  In latest tweets (19:38 on 01/02/21) Taylor confirmed that his offer to stay on was refused due to a Whitehall policy of leaving posts unfilled rather than allowing ad hoc continuations.  This means that the labour market enforcement office has no director and therefore is not allowed to say anything publicly, engage stakeholders or produce reports.

This is truly shocking given what we know about the increasing exploitation in the labour market currently, a fact that Taylor himself is all too aware of, and therefore government officials are also aware, but despite this they have made a conscious decision to render the labour market enforcement office utterly powerless and defunct.

As a reminder, during this 3+ month gap no public activity can take place, i.e. no progress can be made on the numerous commitments of the Good Work Plan that fall within the office’s remit.  The significance of this should not be downplayed, particularly given that the GLAA and Employment Agencies Standards both fall within the Directorate of Labour Market Enforcement, and both have an important role in stamping out the increasing pandemic-related exploitation of innocent workers.

The ever-moving goalposts of umbrella regulation

Another cause for concern is the impact on the planned regulation of umbrella firms by the Employment Agencies Standards department of BEIS, which reports to the Director of Labour Market Enforcement.  Matthew Taylor’s Good Work Plan, published in July 2017, recommended that umbrellas should be regulated by the government.  Following a consultation this was accepted and planned to be implemented from April 2019, i.e. coinciding with the start of a new tax year.  It was confirmed that the regulations which already govern recruitment agencies would simply be applied additionally to umbrella, a straight forward approach rather than drafting new umbrella-specific regulations.  This approach requires primary legislation to be enacted in order to expand the remit of the Employment Agencies Standards department.

However, the legislative change did not happen in time for April 2019 due to the parliamentary timetable being fully absorbed by Brexit, so it was hoped to come in for April 2020 instead.  However once again Brexit dominated Parliament, and then the pandemic subsequently took hold.  Therefore, we hoped that the plan to regulate umbrellas would instead come in April 2021, which given the continued pandemic was always going to be a longshot.  Without a Director of Labour Market Enforcement to push for the relevant legislation to be prioritised amongst other highly pressured issues, it now seem even more unlikely.

Why does it matter so much?

The important point is that such schemes are once again already on the rise ahead of this year’s off-payroll changes due in April 2021.  And without government regulation there is nothing to protect innocent workers against being duped into these schemes and being liable for a very large future tax bill.  If you are in any doubt as to the impact personally and financially of such schemes, you should listen our chat with a victim here.

All of which leads back to the importance of government regulation for the umbrella sector, which now seems unfeasible to come in at the very time it is needed to protect innocent people who will be exploited.

Our founder, Julia Kermode, thinks that the planned umbrella regulation needs a wholesale rethink.  If it can’t be in place by April 2021 to help off-payroll workers (who will be targeted and exploited by fake umbrellas) then it should not be rushed at all.  The planned regulation was never going to be fit for purpose because many of the recruitment agency conduct regulations are simply not applicable to umbrellas, and there is a glaring gap in which does not address the tax implications of dubious umbrellas and scheme providers.  It is these tax implications which must be prioritised to be dealt with, and HMRC so far have been ineffective in doing so.  So let’s shelve the original plan, and choose instead to develop properly targeted regulation for umbrella firms that will deal with non-compliance and make a genuine positive difference to the workers that use them.

17 June 2022
We use cookies on our website to give you the most relevant experience by remembering your preferences and repeat visits. By clicking “Accept”, you consent to the use of ALL the cookies.
Cookie settingsACCEPT
Manage consent